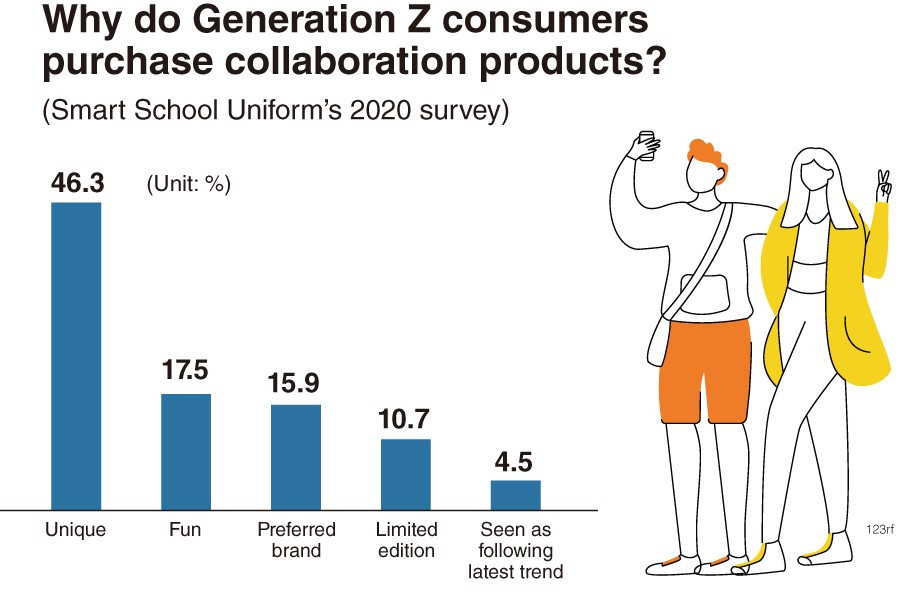 Looking back on what we have consumed over the year could be one way to wrap up the year 2021, while preparing to make better choices in the new year. Whether an impulsive purchase or a considered decision, consumption patterns show what we desire and what cultural codes and trends are leading the society today.

The pandemic challenges the once taken-for-granted in-person connections and communications. But this year also saw active communication between the market and businesses, leading to several successful collaborations.

“Collaboration is multiplication,” said John C. Maxwell, an author and public speaker. This can also be applied to how smart collaborations can double the attention of consumers, especially those looking for something not just new, but fun. In Korea, they are often referred to as “funsumers.”

Funsumers mainly are of the digitally savvy “MZ generation,” born between 1980 and 2000. The population census puts the MZ generation at an estimated 3.43 million, accounting for some 35.5 percent of Seoul’s population.

Although difficult to generalize, this generation is said to be more open to expressing their preferences, opinions, likes and dislikes, when compared to baby boomers -- those born in the mid-1940s to 1960s.

Thus, they tend to actively share their experiences both on and offline, making the products or services they enjoy go viral.

Collaboration across different fields are forecast to continue as a leading trend in Korea in 2022, brought on by new consumption patterns.

A first-time traveler to Korea might easily mistake the polar bear logo for a popular domestic snack brand, but it isn’t.

The Gompyo collaboration began purely by chance in 2017, when online shopping mall 4XR began selling T-shirts with Gompyo’s bear printed in retro designs. Instead of suing the shopping mall for copyright infringement, Gompyo decided to join hands with the brand to make more collaboration merchandise. The collaboration items expanded to baseball caps, puffer jackets and backpacks, which were sold with consecutive reorders.

Learning from the success, Gompyo began to launch other collaboration series, partnering with LG Household & Health Care to make Gompyo toothpaste and detergents. Teaming up with 7Brau, it released Gompyo canned beer and popcorn.

Park Jae-jeong, brand marketer of Gompyo, said the aim was to maintain the existing brand image, but “give witty tweaks to the brand” with varied products to offer a fun experience to consumers.

In March, popular sports brand New Balance paired up with Ofr. Paris, a bookstore in Paris founded by Marie and Alexandre Thumerelle. The launch excited many avid travelers in Korea who are also interested in street casual attire.

Over the past two decades, Ofr. Paris has become a must-visit store in the French capital for the MZ generation. The store also expanded into a gallery, studio and publisher. Under the theme ”My Little Paris,“ Alexandre’s own font is inscribed on the designed t-shirts, slippers and eco bags, along with New Balance’s quality-proven garment materials and logos.

”It‘s not just about loving one brand or the other. I liked the image of the two logos mixed and designed together, forming an idea that travel, arts and books, can all connect to fashion,“ Lee Ju-yi, a fashion and style editor in Seoul, told The Korea Herald.

- From web comics and novels to shows and games

Platforms evolve as technology develops, but an appealing narrative is appealing regardless of its form.

Web novels and web cartoon series that have proved successful are making inroads into other platforms with their original storylines, to draw audiences on a global scale.

A recent example is Netflix Korea’s fantasy horror series, “Hellbound,” directed by Yeon Sang-ho of “Train to Busan (2016).” The series started out as a web comic created in 2019, also by director Yeon, who worked with illustrator Choi Gyu-seok. Choi is the author of another megahit web cartoon series “Awl (2013),” which has been made into television drama series “Songgot: The Piercer (2015),” after the original web cartoon attracted millions of fans.

“I did not know that ‘Hellbound’ was a web cartoon, until I saw posts of the director’s past works,” Ha Dong-hee, an office worker in her early 30s, told The Korea Herald. “While digging into Yeon’s original works, I was mesmerized by the sharp depictions shown in illustrations, so that led me to reading Choi‘s web cartoon.”

Another hit collaboration on a different platform is “Dalbit Jogaksa,” a fantasy novel written from 2007 to 2020, by author Nam Hui-seong. Comprising 58 volumes, the novel was published both in print and online over the years.

While the novel was being published, game developer XL Games, saw the potential of turning the story into a mobile game. The novel-turned game, titled The Legendary Moonlight Sculptor, was launched in 2019 to immediate success, ranking first in sales on Apple’s App Store and second on Google Play. The popularity of the game was led by fans and enthusiasts of the original novel.

Likewise, fandom culture expands as viewers come to engage through different platforms. The cases also prove that as long as the narrative is attractive to the loyal fans, they return to the piece no matter what the medium.

In a crowded metropolis like Seoul, people are constantly running against time, juggling multiple tasks at once. Traffic congestion only further exacerbates the problem during peak rush hours.

Online spaces and “metaverse” are rising as the next big thing to solve this lingering issue, but there are times when one still needs to be physically present.

In September, SparkPlus, an office space rental agency based in Seoul, rented and opened co-working spaces at four subway stations around Seoul -- Gongdeok, Madeul, Yeongdeungpo-gu Office, and Wangsimni stations -- on top of the existing 25.

Some 210 people registered in 2016 when SparkPlus first opened their shared office space in Seoul. The number has grown significantly over the past five years, reaching 14,980 members this year with an estimated annual sales of 45 billion won ($38.2 million).

“We thought of expanding our spaces to subway stations, since it saves a considerable amount of time for remote workers and startups. They can easily drop by to spend a few minutes to several hours before they move to their next meeting, having a guaranteed work space inside the subway station,” a SparkPlus employee told The Korea Herald.

The employee also added that a clean and well-organized space fully equipped with printers, coffee machines and the latest magazines, is essential to accommodate the needs of office workers.

Another example of collaboration among spaces is the convenience store CU’s banking kiosks within stores.

After a month of operations, the number of visitors increased by 20 percent, proving the success of the unique combination of convenience stores and banks, according to CU’s operator BGF Retail.

BGF Retail is looking to expand their PLCS locations with businesses that need offline channels to increase brand awareness, but do not wish to open a brick-and-mortar store, to secure win-win opportunities for brands and consumers.